Dear Boa Onda Guesthouse Peniche‘s friend through today’s post we want to talk about a famous Portuguese surf resort so popular these days because of the giant waves that are forming at the famous Praia do Norte. Surf enthusiasts will have already realized that the focus of this post will be Nazaré and specifically we will analyze the best options on how to get from Nazaré to Peniche and enjoy the 2 best surfing sports in Portugal.

So lovers of yoga classes or aspiring students of our surf school in Peniche, do not miss the information contained in this article.

The famous waves of Nazarè

Those who do not know Nazaré should know that this Portuguese town, about 1 hour and 30 minute drive from Lisbon, has become so famous because of the gigantic waves that are created at the renowned Praia do Norte beach, a place of international competition: World Surf League Big Waves.

The decision to write this article was born after the recent days, when Nazaré has become an international pilgrimage destination for professional surfers, enthusiasts, travelers on tour and participants in the Web Summit 2018

Even in Italy, the news of these huge waves of 20 meters has caused quite a stir and for this reason we decided to inform all those who were interested in discovering the information on how to get from Nazaré to Peniche and enjoy the best surf Portugal.

The best means of transport to move to Portugal, especially if equipped surfers are 2:

For transfers from large cities such as Lisbon or Porto, we could also recommend the train which, although slightly more expensive, will allow you to move easily within the country. If, however, your intent is to move along the coast or in small villages, the only options available are those mentioned above or the bus and car on all.

From Nazaré to Peniche by car

Now let’s analyze your hypothetical transfer from Nazaré to Peniche by car. The distance between these two locations is about 68 km, easily traveled by car in about 56 minutes. 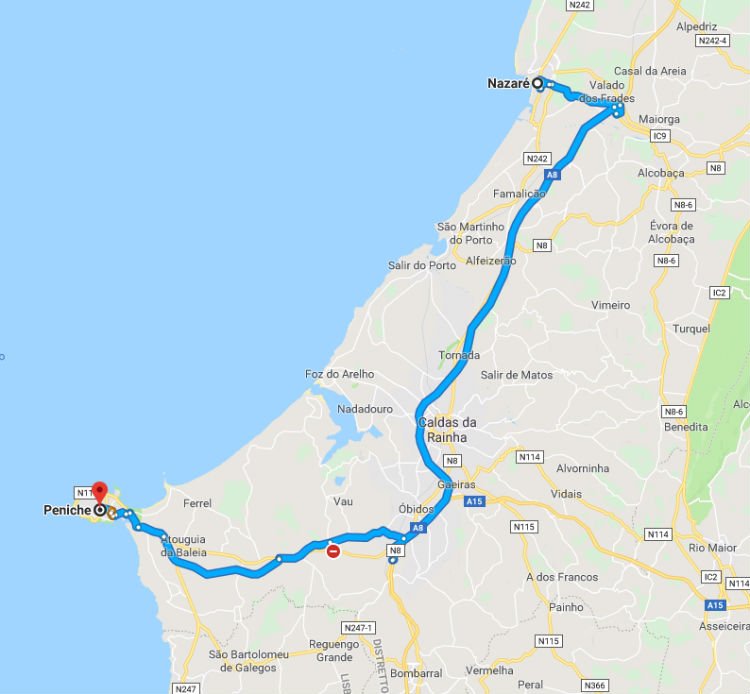 The best route is certainly the one through the A8 motorway that from the city of Porto leads to Lisbon passing through the coastal towns. From Nazarè you have to descend towards Caldas da Rainha, pass Obidos and then exit towards Peniche.

Always unwary, it will lead you to your destination in no time at all. Obviously you do not run too much, because the police can sometimes be placed in search of reckless tourists. If it happens you need to have cash to pay the fine and avoid further problems. Word of Portuguese friends 🙂

From Nazaré to Peniche by bus

The other option available is the one related to scheduled buses. Among the Portuguese companies, we usually favor Rede Expressos for the good service it offers. The company offers the connection between Nazaré and Peniche 3 times a day during the following times:

The journey time is about 1 hour and 10 minutes and the average price should be around € 10 per trip. Obviously booking online and on time, you can take advantage of promotions and discounts.

The starting point in Nazaré is:

While the point of arrival in Peniche will be:

We have come to the end of this short guide on how to go from Nazaré to Peniche. We hope to have given you the information you were looking for and if you need further clarification please email us and we will do our best to help you as soon as possible.

The Boa Onda Guesthouse season is coming to an end, but if you still want to surf do not miss our November promotion, with discounts on all the prices displayed on the site.