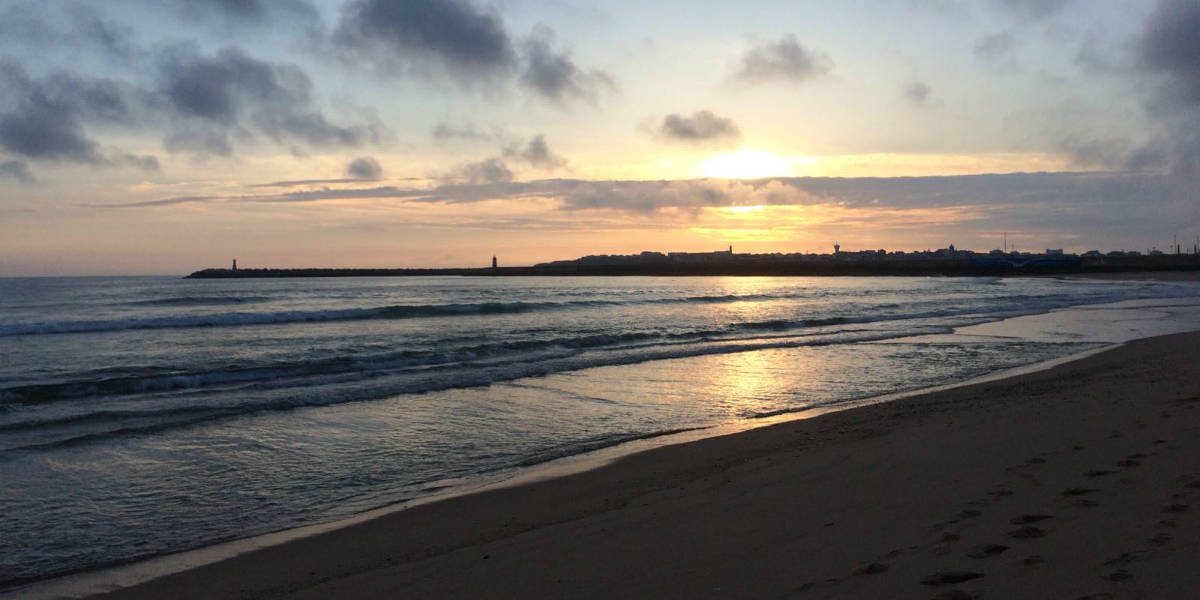 Today’s post is dedicated to discovering the best Peniche beaches trying to offer the most useful and interesting information to all those who wish to spend a holiday in Portugal.

For those not familiar with the town of Peniche, we can tell you that it is one of the largest fishing ports in Portugal as well as a large Atlantic center of maritime and tourist activities. Extremely popular with surfers, the Peniche area is one of the hottest spots for fans of the sport, as they can enjoy the waves of the ocean for around 365 days a year.

For this reason, the surf schools in Peniche are numerous as well as accommodation facilities. In some previous posts we had already offered information on how to get to Peniche from Lisbon, so today we will continue our journey to discover this Portuguese place telling you about the best beaches in Peniche.

Which are the best Peniche beaches

Let’s start from the main question about Peniche and its amazing beaches, the same question that hundreds of people research constantly online: which are the best beaches in Peniche in 2018?  Our personal ranking is as follows:

Before reviewing them one by one, we would like to provide a geographical reference on their position. Here is a detailed map: 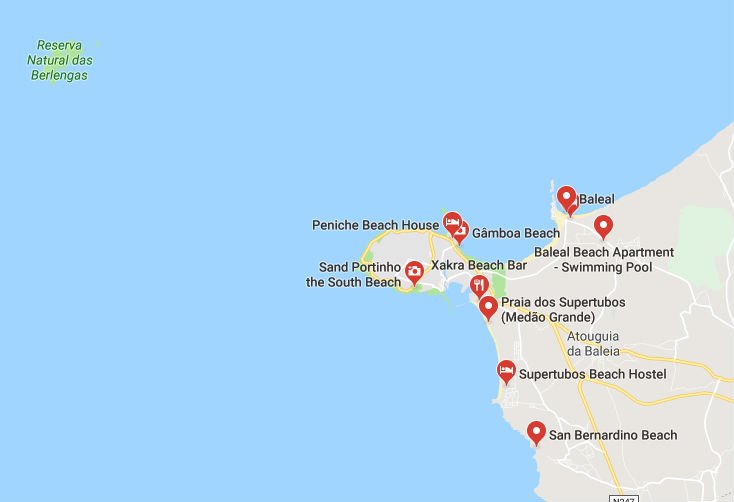 The first beach in Peniche we are talking about is Praia da Consolação, which is right in front of our guesthouse, a 2-minute walk from the sea. Every day and every night the noise of the ocean accompanies us during our sleep. A particular element of this beach, is the Fort which divides Praia da Consolação into two distinct areas.

A first area is rocky, very rich in iodine in the south, with an excellent sun exposure and important therapeutic properties that makes it the favorite destination for many patients looking for relief for bone pain. In the northern area instead, the landscape is completely different. Taking the fort as a reference, one notices a very long beach that extends for several kilometers in the direction of Peniche.

Bathed by a sea characterized by strong waves, the beach is especially appreciated by lovers of surfing and windsurfing. On a naturalistic level it is the best place to stay to enjoy the landscapes, nature, sunsets and yoga courses offered by our structure for example. 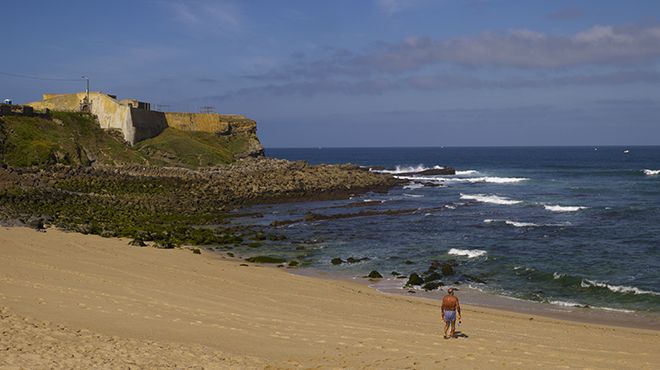 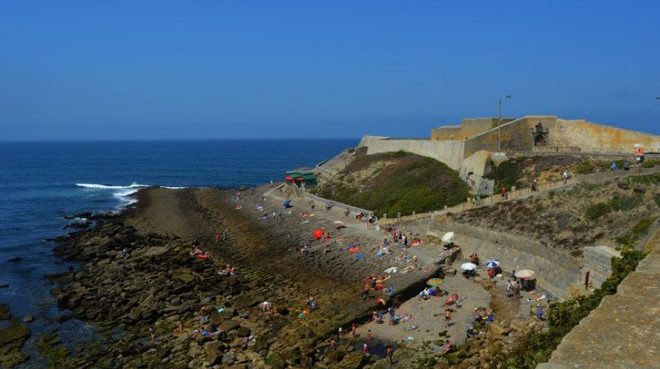 The Praia do Baleal, is the trendiest beach among those indicated. It is the coolest place in Peniche, where so many surfers enjoy the waves and a few drinks after a session in the sea. Located on the south side of the isthmus, it is an extensive stretch of calm water that provides good conditions for practicing and learning the basics of windsurfing.

The area has several hotels that offer tennis courts, swimming pools, a disco and an equestrian center. Everything you need to enjoy a holiday of sport and relaxation.

Surfers have arrived at their destination, as this will be the beach where they will spend most of their stay.

Welcome to Supertubos Beach, the reference beach of Rip Curl Pro Portugal, stage of the world surfing championship that every year reaches Peniche towards the end of the month of October.

Considered one of the best surfing and body boarding beaches, both nationally and internationally, the Praia de Medão is famous for its perfect, tubular-shaped waves, known as the “Supertubos”.

The crest of the wave is so long as to create an empty space, a real pipe, attracting fans of this sport from all parts of the world and throughout the year. A must for professional, passionate and curious surfers. 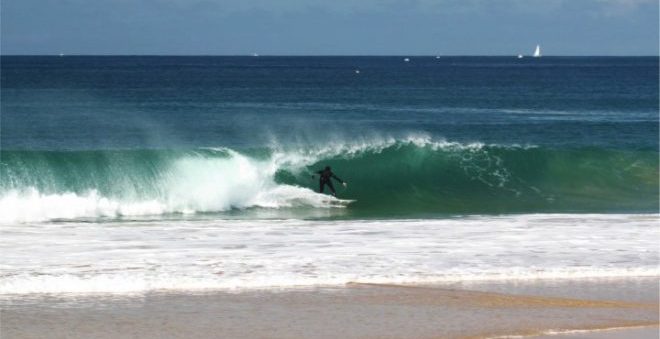 It is the closest beach to Peniche city and its old historic center. Located near the small lighthouse of Peniche, Praia da Gamboa is a beach bordered by a cord of dunes covered with vegetation that protect it and make it more welcoming. The long beach, which invites to beautiful walks, extends without interruption until Praia da Cova da Alfarroba.

The beach of the Berlengas Islands nature reserve is certainly one of the city’s major tourist attractions. Located in front of Peniche, about 10 km, the Berlengas archipelago is an outpost of nature in an almost wild state. Composed of three groups of islets:

it preserves a luxuriant local vegetation with unique species, such as the Armeria berlegensis and the Herniaria berlengiana, whose names perfectly underline its origin.

Numerous bird species find here an ideal refuge to nest or to stop during long migratory journeys. The most important presence is undoubtedly that of seagulls, which are found everywhere. There are also species at risk of extinction, such as uria, a passerine similar to a small penguin, chosen as a symbol of the reserve.

The protected area also includes an important marine reserve of 985 hectares, whose fauna is very diversified. It is important to stress that the only one inhabited throughout the year is that of Berlenga. However, this is done solely for the purpose of ensuring the indispensable services such as the operation of the Lighthouse and the vigilance of the Reserve, given that isolation comes to be absolute. Between the months of May and October, a daily sea transport service from Peniche ensures connection to the island.

Several operators are located near the marina of Peniche, but possibly Boa Onda Guesthouse Peniche can organize everything for you. With a maximum capacity limited to 350 people, Berlenga is the ideal island for those seeking tranquility, far from confusion.

To visit it, you can follow the paths, to be covered on foot, which lead to the Caves, the São João Baptista Fortress or simply to ideal places to admire wonderful landscapes

Our research dedicated to the best Peniche beaches ends here. We hope, to have offered you an interesting service that will facilitate the organization of your trip to Portugal. Peniche obviously offers much more, both for those in love with surfing and yoga.

There are also countless guided tours that can be organized in Peniche surroundings like Sintra and Obidos. All these activities are available at our guesthouse, which is ready to welcome you with open arms.

For any information regarding the best beaches in Peniche, as well as all the connected accessories you will not have to do anything else but contact us at the following contacts:

Advice and suggestions are always welcome. See you next time!